Increasing Performance by Unblocking the Filters of the Mind

Otto Scharmer, Senior Lecturer at the Sloan School of Management, MIT, has said, “the quality of results in any social system is a function of the consciousness from which the people in that system operate”. Therefore, if we want to improve our performance, as individuals, teams and organisations, we need to develop our consciousness.

Even though no one knows definitively, a widely held view is that consciousness is produced by neurons firing in our brain. This view is the result of aspects of consciousness correlating with physical activity in the brain and is often known as the 'conservative perspective'. However, correlation is not causation. The problem with this conservative perspective is that it struggles to integrate findings from research into parapsychology, which studies phenomena such as near-death and out-of-body experiences, extrasensory perception, telepathy, and precognition. While great work has been done debunking the charlatans who claim to have psychic abilities for fame and fortune, findings from rigorous scientific research tend to support the hypothesis that these phenomena do exist.

The radical perspective on consciousness isn’t new. In fact, the Vedic Rishis of ancient India, who lived around 1500 BC, taught that an all-encompassing field of pure consciousness exists and that each individual consciousness is a small constituent part of it. William James (1842-1910), one of the founding fathers of psychology, believed that the brain filters our access to a field of consciousness, which extends beyond our body. In filtering this consciousness, James proposed that the brain acts as a barrier allowing us to perceive just the surface of what is possible. The philosopher, Henri Bergson (1859-1941), supported James’ view by developing a theory that the brain, nervous system and sense organs are, in the main, eliminative and not productive. Following his experiment with psychedelics, the author Aldous Huxley (1894-1963) described how the ‘Mind at Large’ is reduced by the brain to create a measly trickle of consciousness, just enough to keep us alive on this particular planet. This radical perspective has also been drawn upon by physicists trying to understand the quantum world. The quantum physicist, Wolfgang Pauli (1900-1958), collaborated with the psychologist Carl Jung (1875-1961), to explore and describe the unus mundus, a collective consciousness that individuals can access to varying degrees.

By drawing on this radical perspective, it can be hypothesised that our spiritual self channels a flow of consciousness, from the field through our embodied brain, so it can manifest itself in the physical realm, as our mind. The spiritual self is the core of our being, not conditioned by everyday life experiences, and it does not need defending. Our mind then directs this flow of consciousness to our psychological capacities, which allow us to perceive, experience, understand and relate to our inner and outer worlds through our awareness. With this hypothesis in mind, it could be argued that those who claim to experience parapsychological phenomena may be able to gain awareness from the perspective of their spiritual self, allowing them to access the field of consciousness and perceive its contents. 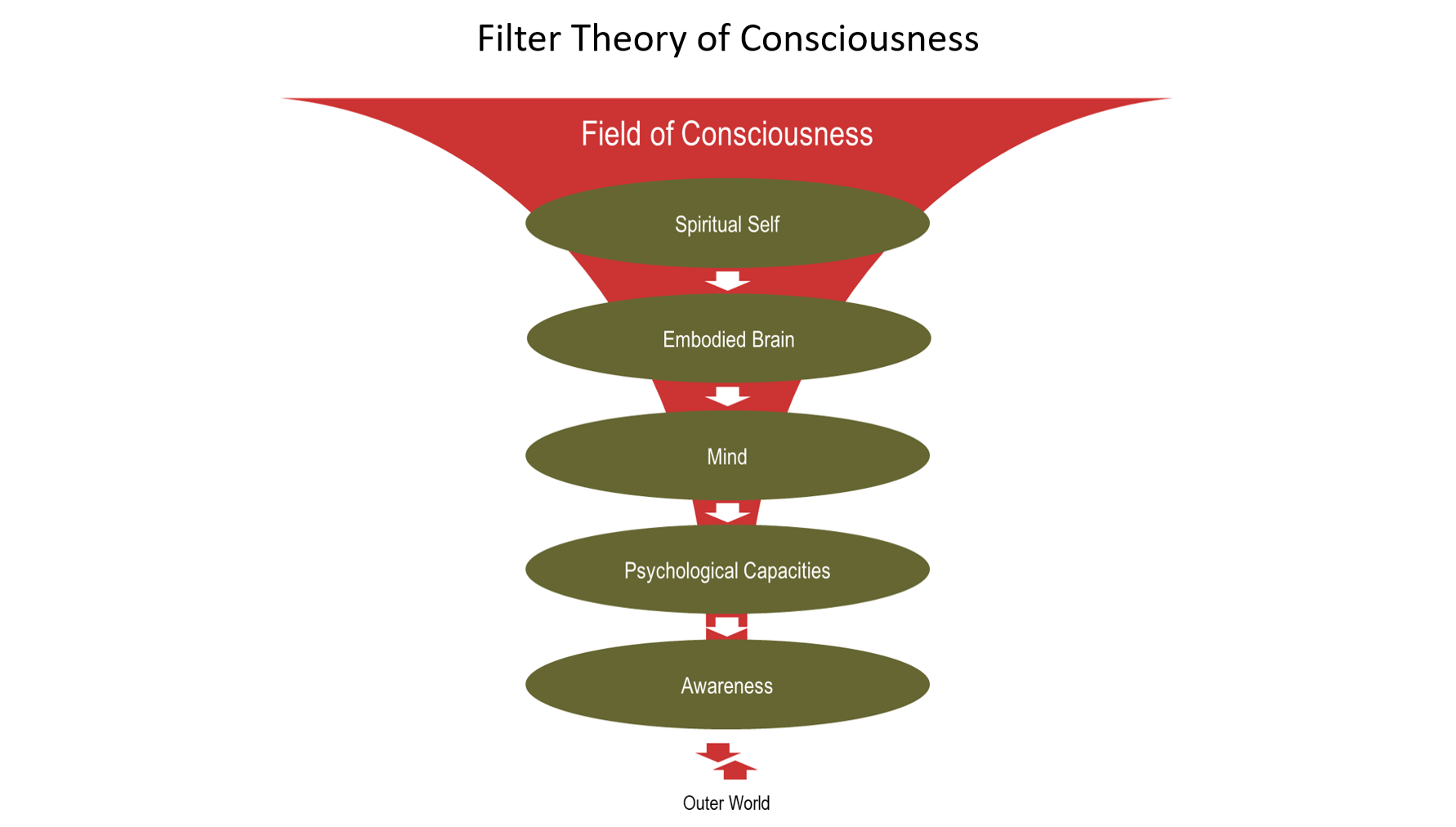 With the brain and mind acting as filters on our consciousness, its flow is reduced. Like all filters, over time, they get clogged up, reducing the flow even further. The greatest blockage in the filter of our mind is our ego. This is our self-identity, self-image or self-esteem. Our ego develops to navigate the separation we experience with the outside world. The trouble is that our ego is easily hurt and requires a lot of protection. Consequently, over time we pick up psychological scars, ego defences, complexes and neurosis. All of these are like psychological detritus, which gradually clog up the filter of the mind. We often experience this psychological detritus as our self-critical inner voice, which tries to keep us safe, but often gets in our way and reduces our performance.

To maintain and increase our performance, we need to periodically unblock and clean the filters of our mind. It’s just like taking our car for a yearly service, during which the oil and air filters are replaced. After the service, we generally notice our car performing much better. By unblocking the filters of our mind we are able to think with greater agility, engage with higher levels of empathy and compassion and behave with greater flexibility. All of these psychological capacities are greatly needed if we are to succeed in today’s increasingly volatile, uncertain, complex and ambiguous (VUCA) work environment.

Sophrology has been found to be an effective method for unblocking the filters of the mind. The word Sophrology comes from three Ancient Greek words “sos” (“harmony”), “phren” (“mind”), and “logos” (“study”). So, it literally means “the study of the consciousness in harmony” or “the science of the harmony of consciousness”. It was developed in the 1960s by Alfonso Caycedo (1932-2017), a Spanish Neuropsychiatrist. It is a unique blend of science-based elements such as relaxation techniques and Autogenic Training with ancient practices such as meditation, Tibetan Buddhism, Japanese Zen and yoga. Underpinning all these elements is the philosophy of phenomenology. In particular, Sophrology draws heavily upon the techniques of phenomenological reduction developed by the philosopher Edmund Husserl (1859-1938).

When we encounter something that is separate from us, phenomenological reduction allows us to strip back all the psychological detritus that gets in the way of us connecting with it. Therefore, we are better able to encounter something as it truly is rather than as we are. In doing so, we are able to more fully connect with it and overcome our perceived separation. Through regularly practising phenomenological reduction as part of an overall Sophrology practice, we are able to gradually clean and unblock the filters of our mind, allow more consciousness to flow through and, consequently, increase our performance.

While not very well known in the UK, Sophrology is hugely popular across mainland Europe and has been applied to diverse areas such as self-development, stress management, exam preparation and to increase performance in sports. In 1967, a Swiss national ski coach asked Raymond Abrezol (1931-2010), a doctor, dentist and Sophrologist, to train four Swiss ski athletes for the Grenoble Winter Olympic Games. Three of the athletes won Olympic medals. This led to Abrezol training athletes in boxing, cycling, fencing, sailing, skating, tennis, polo, golf, and other sports. Athletes coached by Abrezol won over 200 Olympic and World Championship medals between 1967 and 2004. In fact, the golfing legend Seve Ballesteros is reported to have said he firmly believed he owed his success to Sophrology. Due to its success in sport, Sophrology is increasingly being applied in the corporate world, from the shop floor to the boardroom.

Contact us if you would like to talk with Terry about how to increase the performance of the people in your organisation. Take a look at Terry’s profile to find out about his work.